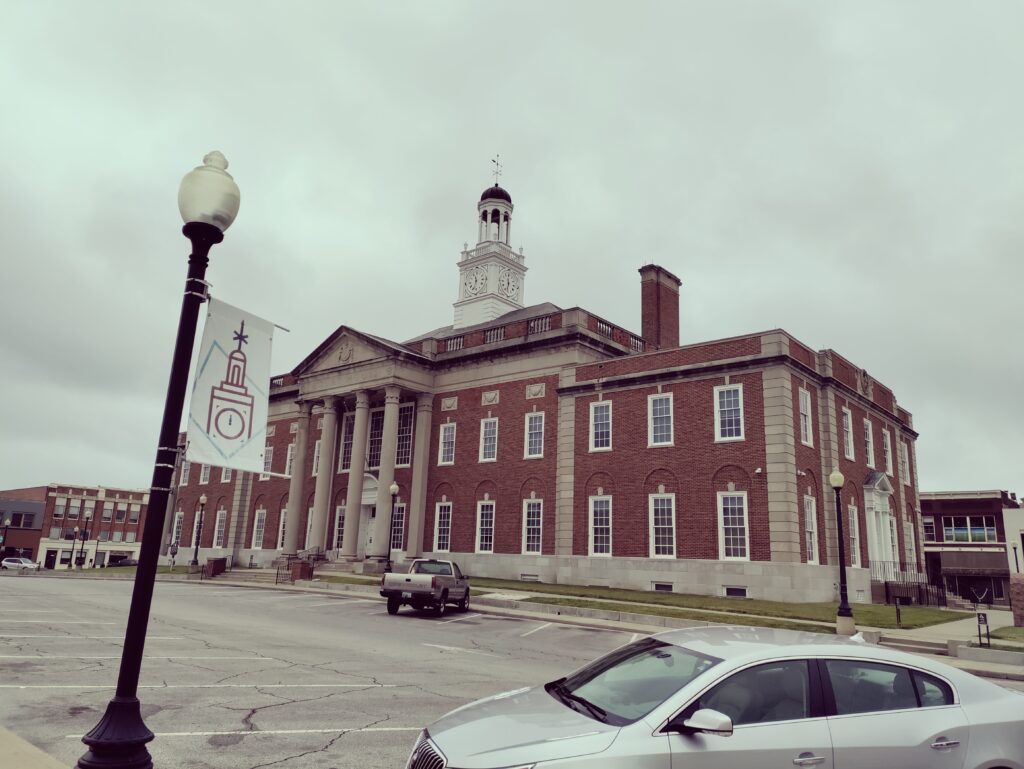 This tour stop takes us back to Independence, where the First Battle of Independence occurred on August 11, 1862. There is a single informational sign on the south side of the courthouse and don’t forget to visit the 1859 jail and museum which was the topic of the last Border War Tour Stop.
One other note that I want to point out about the Independence Square concerns the statue of Andrew Jackson, the namesake for Jackson County, which is located on the west side of the courthouse. Most are aware that President Andrew Jackson is one of the poster children for statues that should be taken down due to the actions of the person being memorialized. Check out the images in this post to see the way that Jackson County mitigated this problem without taking the statue down.
In the summer of 1862, Confederate General Thomas C. Hindman developed a strategy to gain military control of Missouri by launching an invasion of the state from his location in Arkansas. To gather support for this plan, he would send well-known and respected Missourians, who now fought for the South, into Missouri to rally support and recruit men from the area to fight for the Confederacy. The newly recruited troops would then be brought back to Arkansas to prepare for the invasion of the state in the fall.
Colonel Upton Hayes was one of those well-known Missourians. He returned to his home in Jackson County and by early August he had raised over 150 men who were camped in the Lees Summit area. To keep the Union forces occupied, Hayes asked William Quantrill to move his men away from Lees Summit and to keep the Federals occupied elsewhere. At this point in the war, the primary function of guerrilla bands like Quantrill’s was to “pester” the Union forces by upsetting supply lines and small union detachments. The guerrillas would attack these parties and then scatter into the woods and ravines of western Missouri, making them impossible to follow and thus catch. The upcoming Battle of Independence was one of the first times where a guerrilla unit was used in conjunction with the regular Confederate army as part of a regular military action.
On August 10th, ranking officer Col John T Hughes and his 75 men joined Col Hayes and Quantrill in Lees Summit to prepare to attach the Federally held town of Independence. Hayes’ unit had more than doubled by this time and the three leaders now led a force of around 400 men. Lieutenant Colonel James T. Buel, commanded between 400 and 500 men in Independence. (sources vary widely as to the total number of combatants on each side, I’m using the most often cited numbers in the sources that I reviewed)
Buel was not worried about an attack from the Confederates even though their flag could be seen from the top of the Independence Courthouse. Since he was not worried, Buel’s men were spread out around town, with a large portion of them about a ½ mile away in what is now the location of the Community of Christ Temple. The Union headquarters were in the Southern Bank Building, which was a block off the square facing Lexington Street. Other soldiers were stationed at the jail, which was a block off the square to the northwest facing Main St.
The stage is now set for the Confederate attack early the next day on August 11, 1862, tune in next time for the story of the battle.