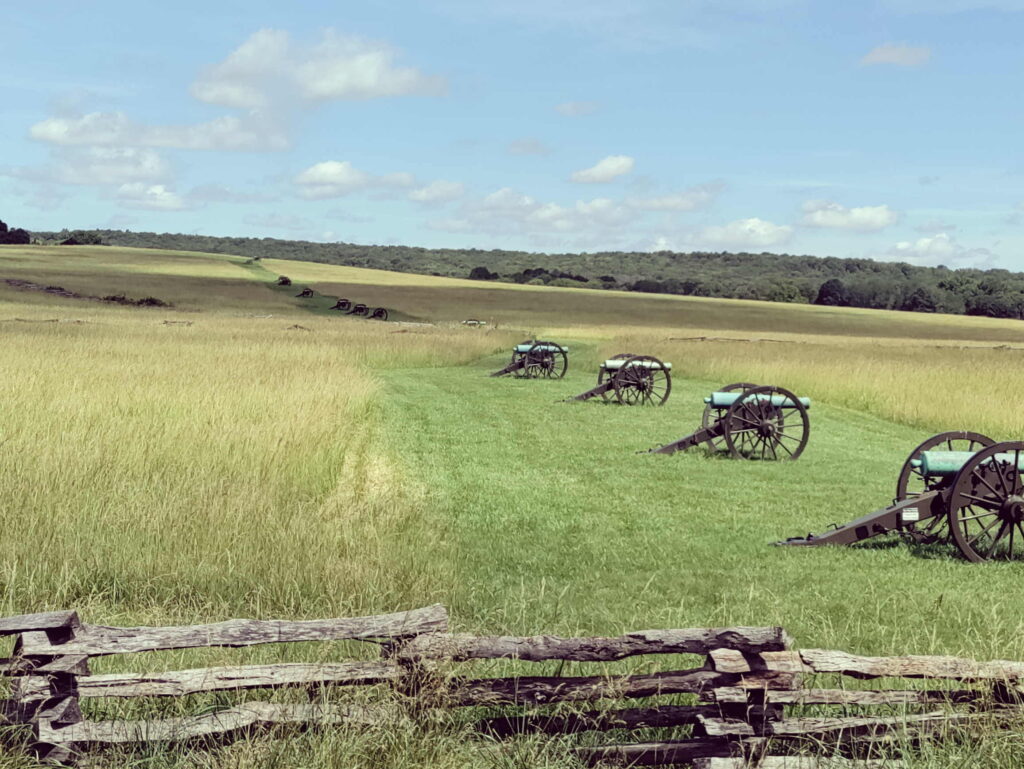 The Battle of Pea Ridge is labeled by some historians as the “Battle that Saved Missouri for the Union”.  I have been trying to get to the Pea Ridge National Military Park for several years.  Jill and I were there in 2020, but the visitors center was closed with no guides or pamphlets to be found anywhere. We went ahead and drove around the park, but without any background, I didn’t get much out of it.  I have been down that way a few other times during the pandemic, but the visitors center was always closed in response to covid numbers.  On June 11, 2022, I finally was able to go and see the entire facility.

I’m going to provide the cliff notes version of the battle in an effort to keep this post under 600 words so.  The situation in Missouri on Christmas of 1861 was simple, newly appointed Brig. General Samuel R. Curtis’ mission was to push all rebel forces out of Missouri.  By February of 1862, Curtis and his men had done that, pushing the main confederate force of Missouri State Guard Troops and their leader, Missouri Governor Sterling Price into Arkansas near Fayetteville.  In early March, Price was able to link up with a larger Confederate force led by General Earl Van Dorn.  With this new massive, 16,000-man army, Van Dorn was determined to push back into Missouri with an eye on journeying north to take the city of St. Louis.

General Curtis’ 10,500 troops stood between Van Dorn and his goals in Missouri.  The Union force was dug in near Elkhorn Tavern which is the heart of the Pea Ridge Battlefield Park.  Van Dorn knew that a frontal attack would be suicide, so he ordered his large force to double-time march for over 24 hours to get behind the entrenched Union Army and attack them from the north.  A good plan, except half of his force grew so weary that they fell far behind the main force.  Rather than wait for his army to join, Van Dorn assigned Brig General Ben McCulloch to attack Curtis from the west with his smaller force.  McCulloch and his men fought the Union to a standoff, but McCulloch and his second in command were killed during the fight.  When his third in command was captured, this portion of the troops had no leadership and basically sat out the rest of the day doing nothing but waiting for orders that would never come.

Van Dorn and Price had more success attacking Curtis at the Elkhorn Tavern and eventually overwhelming them and taking the tavern and the strategic Telegraph and Huntsville roads.  During the night, the Union troops moved into position just south of the tavern and formed a long battle line which was said to be over a mile long. Make sure you view the images to see where this happened.  The union cannons blasted the confederate lines for almost two hours before mounting a charge which overwhelmed confederate lines that retreated.  The confederates were also crippled by the lack of ammunition and supplies caused by Van Dorn’s rushed march to get to Pea Ridge.  This logistical mistake would cost the south the battle and ruin Van Dorn’s reputation.  Most of the Confederate troops were moved to the east where they would fight east of the Mississippi.

Pea Ridge Battlefield Park and Wilson’s Creek Park near Springfield, are, in my opinion, the best battlefield parks west of the Mississippi.  In both parks, it is easy to get a feel for what it must have been like to be one of the soldiers involved in the battles that occurred on these grounds.  I highly recommend watching the film and walking through the museum in the visitor’s center prior to taking the driving tour through Pea Ridge National Park.  As I said earlier, you will have a much better idea of the events if you have the background provided by the visitor’s center.

Don’t forget to pick up a copy of one of my books, “Moonlit Mayhem” and “Border War Tour” via this website.  Also, be on the lookout for updates on my current projects, which will be coming out shortly.  As always, thanks for your support.