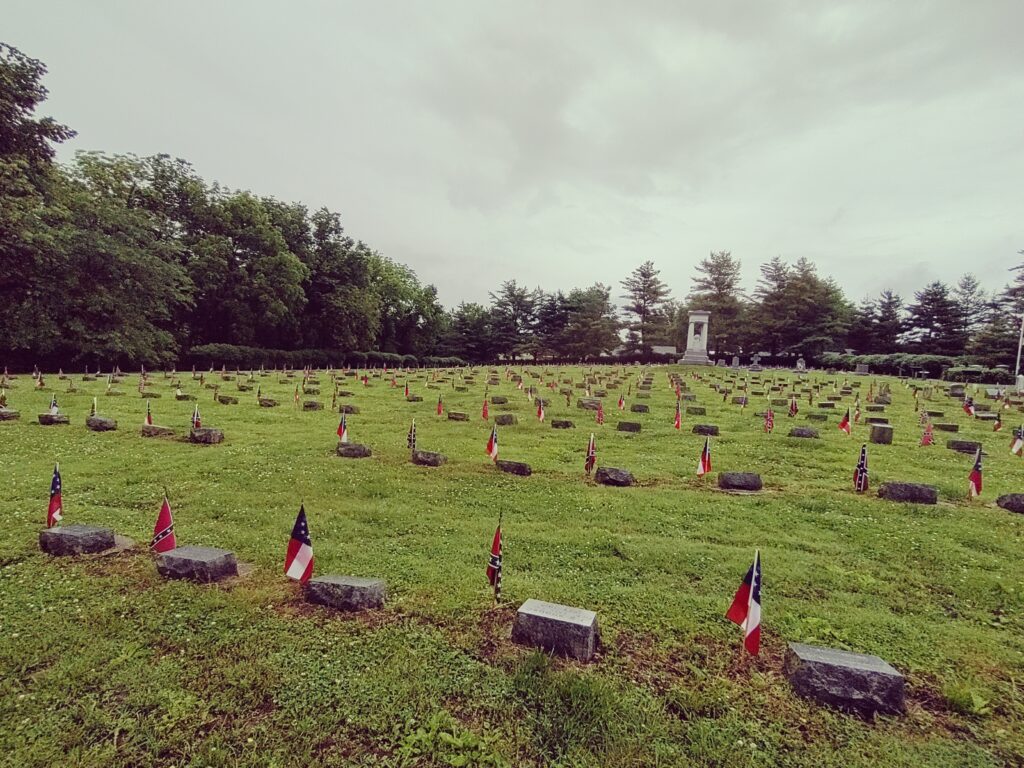 After the end of the Civil War, Confederate Veterans had it rough. Particularly in Missouri, these men had seen their property and most of their worldly goods taken during the war. This meant that they had nothing to go back to. Add to that reconstruction policies by the U.S. Government that made it even more difficult for them to put their lives back together meant that many of these veterans and their families needed charitable help to survive. Look for an upcoming “Border War Extra” article on the “Ironclad Oath” which effectively disenfranchised men who had fought for the Confederacy.
As these veterans got older, it became even more difficult for them. The advanced age of many of these veterans led to the notion of the Confederate Veterans Home in Higginsville, Missouri, in 1891. A newly formed group of women who called themselves the “Daughters of the Confederacy” in St. Louis, championed this cause. The women held dances, bake sales, and the like in an effort to raise funds to create and operate the Veterans Home. The group raised $25,000 which allowed for the purchase of 365 acres of land and the beginning of construction of the home, which was officially opened June 9, 1893.
The new Confederate Veterans Home accepted any man, who could show that he served in the Confederate Army. The Missouri Home also accepted any man who had ridden with Missouri Bushwhacker groups as well as those who rode with the regular Army. Also unique to the Higginsville site is that they also accepted the wives, widows, and minor children of the veterans. The site was surrounded by farmland which allowed the men to farm and own livestock which in turn allowed the Veterans Home to be a self-sustaining community.
The site consisted of a line of private cabins, a dormitory building, a hospital, a cemetery, and a chapel. The cabins and rooms in the dormitory were named after Missouri Confederate heroes such as General John Marmaduke and ex-Governor Claiborne Fox Jackson. In addition to the buildings, the Daughters of the Confederacy also constructed a monument to Confederate Dead in the middle of the cemetery. Today, only one cabin, the chapel, and the hospital remain. See the images with this post to see more details on those buildings.
Unfortunately, the Daughters of the Confederacy could only sufficiently support the home until 1897. At that point, the State of Missouri was forced to take over the funding of the home. By the 1930s, the number of residents at the home continued to dwindle, leading to staff and resources cuts. The state eventually turned some of the buildings into a hospital for disabled children. In 1950, the last Confederate Veteran, Johnny Graves died at 108 years old. At this time the state moved the five remaining widows to other nursing homes and closed the Home, turning the site into a State Park. From 1891 – 1950 the site served as the home for over 1600 Confederate Veterans and their families.
Today, the site is a beautiful park with open fields, several fishing ponds, picnic tables, and playgrounds for people to enjoy. The historic informational signs are no longer the focus of the park and are not well maintained. A few storyboards explain the history of the site, but most of them have deteriorated to the point that they are no longer readable.
The site has made the news a couple times in the last thirty years. In 1992, over 600 people were in attendance as five of notorious bushwhacker Captain William Quantrill’s bones were buried in the southwest corner of the cemetery. The crazy story of Quantrill’s three graves will be the topic of a future “Border War Extra”, don’t miss it! The site was in the news a second time due to a controversy in 2003 over the fact that a Confederate Flag was still flown on the grounds. Public pressure led to the flag being removed.
It should be noted that while the veterans were alive, the U.S. Flag was flown at the site. The Rebel veterans were said to have taken great pride in the military process of raising and lowering the US flag each day. I can find no confirmation that the Confederate Flag was flown daily, but the Confederate Battle Flag was used in ceremonial instances such as funerals, where it would be draped over the coffin of a deceased veteran.