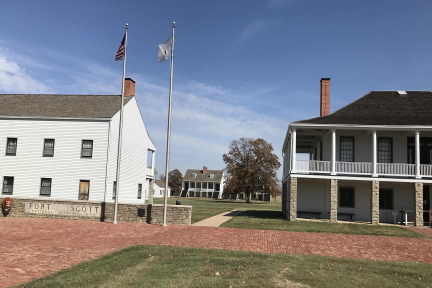 Fort Scott, named after General Winfield Scott, was built in 1842 to give soldiers a place to live while working to maintain peace between white settlers and the Native American population in the area. The fort was also used as a supply point for troops and equipment being sent to the Mexican-American War which lasted from 1846-1848. The city of Fort Scott, Kansas, with current population of 8,087, grew up around the abandoned US Army post of the same name.
The fort was decommissioned in 1853, the buildings were sold to private interests in 1855 and the town was chartered in 1857. At its peak usage in the 1840s, there would have been many buildings outside the actual confines of the fort. Remember also, that at this time in history, the Kansas/Missouri land was mostly made up of tallgrass prairie, so there would have been very few trees, and the trees that did exist would be limited to those growing along creeks and streams.
Fort Scott’s location, only six miles from the Missouri/Kansas border meant that it was right in the thick of the Bleeding Kansas conflict. After the sale of the buildings, the fort housed a pro-slavery hotel, The Western Hotel, on one side of the quad, and an anti-slavery hotel, The Free State Hotel, on the other side of the quad.
The army would be sent to Fort Scott several times over the course of the Bleeding Kansas Era (1855-1861) to restore order between the two opposing viewpoints in the Border War Struggle. During the Civil War years, the fort served as a US Army District Headquarters, hospital, supply depot, training center, and recruiting station for the Union Army. The supplies in the depot, as well as the southern location, made the fort a target for Confederate forces in the area.
The fort also served as a launching point for General James H. Lane’s army of Jayhawkers to go into Southern Missouri and create a swath of death and destruction in those counties. The pinnacle of Lanes Raid was the Raid on Osceola, which will be another stop on the Border War Tour. The raid on Osceola became a rallying cry for Missourian and the phrase, “Remember Osceola” was known to have been shouted by many of the bushwhackers during the bloody raid on Lawrence on August 23, 1863. 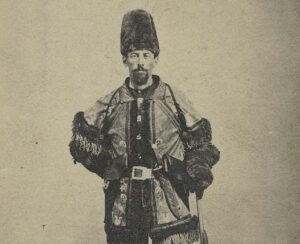