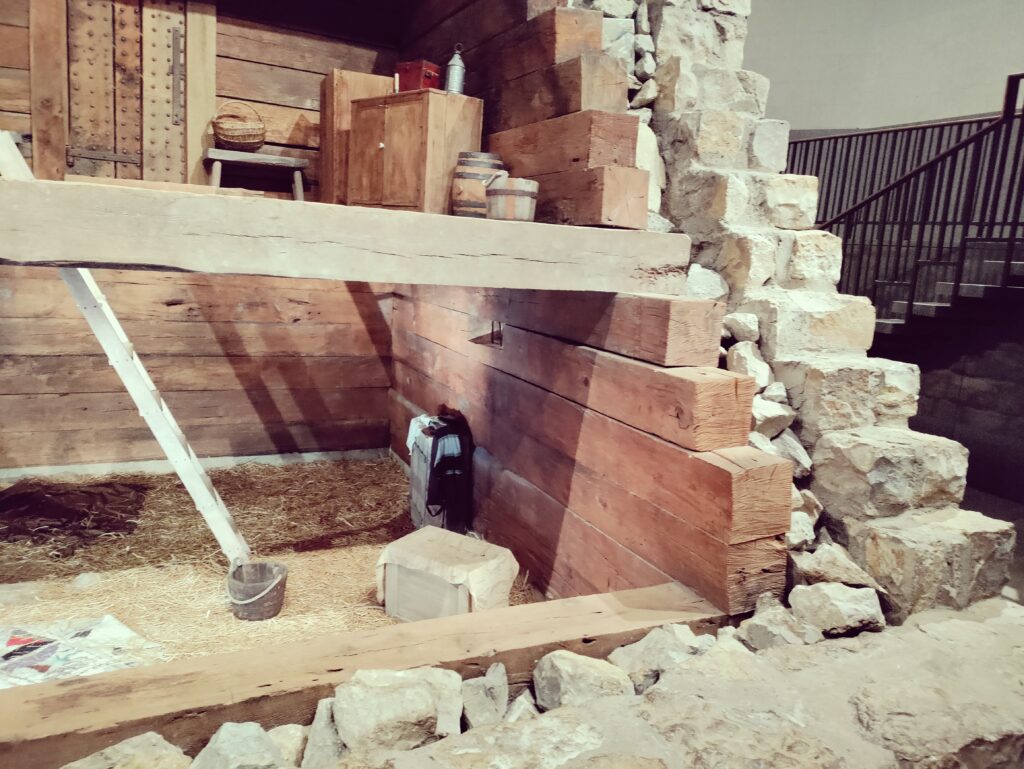 My wife was concerned that I was considering joining the Mormon religion after watching “Under the Banner of Heaven” on Hulu.  While joining up was never in my mind. I will admit that for a few weeks I was a bit obsessed with the story.  I am fascinated by the history of the religion, particularly since the Kansas City area played such an important role in that history.

On my way back from Caldwell County where I visited the Site of Haun’s Massacre and the Far West settlement, I thought I might as well stop by Liberty and visit the historic Liberty Jail since I had not yet written about the jail in my blog.  I was very surprised to learn as I walked up to the jail that it was owned by the Mormon Church.  What’s the connection?  Read on.

If you remember from my last post, we had left the Mormons in Far West.  The Caldwell County city had grown to around 5,000 residents, 4,900 of them Mormons.  The problem was that some of the incoming Mormon settlers had not abided by the rules of the deal which said that Mormons were welcome to settle in Caldwell County, but not in other surrounding counties.  This led to several incidents with Mormon settlers and eventually on October 24, 1838, the battle of Crooked River, which occurred in northern Ray County near Elmira.  That event was followed on October 30th of the same year by the massacre of Mormons by the Missouri Militia at Haun’s Mill. Read more about Haun’s Mill in post number one in this series.

After these and other incidents, the Missouri Governor raised 2,500 men and sent them to Far West to arrest and execute Joseph Smith and other church leaders.  One of the commanders of the militia was none other than the Mormon’s own lawyer, Alexander Doniphan.  The militia camped just outside of Far West and sent word that Joseph Smith and five of his men would come out to speak with them or the militia would murder every man, woman, and child in the settlement.  When Smith the other four came out, they were immediately arrested.  After a sham trial in which they were found guilty and sentenced to death, Doniphan was given the order to execute the men at 9 am the next morning.

Doniphan refused.  Saying to General Samuel D Lucas, “It is cold-blooded murder.  I will not obey your order.  My brigade shall march for Liberty tomorrow morning at 8 o’clock and if you execute these men, I will hold you responsible before an earthly tribunal, so help me God.”  Doniphan took the five men to the Liberty Jail, which is two blocks north of the Liberty Square and the old courthouse.

The men were kept in the Liberty Jail for a few days before being transferred to Richmond where they were held in a log cabin near the jail because the jail was full of other Mormons arrested for various other charges.  After a preliminary hearing in Richmond, which found that the men should be bound over for trial, the men were transferred back to Liberty where they would stay until April of 1839.  At that time, they were transferred to Gallatin and then to Boone County after a change of venue was approved.

According to legend, on the way to Boone County, the guards, with the understanding of the Sheriff, allowed the men to escape because the Sheriff was sympathetic to their plight.  The community of Far West was abandoned, and Smith called for the Missouri Mormons to leave Missouri and meet back at Nauvoo, Illinois which would be the location of their next settlement.

There is a 2019 movie called “Out of Liberty”, which, while it will not win any Academy Awards, does give a pretty good view of the plight of the men inside the Liberty Jail.  On my visit, I went to Liberty looking for an old building that might have been a jail. I did not find it.  Rather, there is a modern building with a dome.  The old jail is inside that dome.  I was a bit concerned when I entered the building that I was going to be pressured to become a Mormon as the greeters are Mormons working at the site.  I was pleasantly surprised that my guide, Don, did not press me regarding my faith in any way.  I was also pleasantly surprised that Don was more than willing to answer all of my questions including questions about plural marriage and the Mountain Massacre, which was not the Mormons’ finest moments.  He was very knowledgeable, and I really enjoyed talking with him.  Of course, he gave the church’s answer to my questions, but I did not expect anything different.

I hope you enjoyed my three-part Mormon trilogy.  Let me know your thoughts about the series, and make sure and check the full list of blog posts on my website www.jonathanjonesauthor.com or via this Facebook page.