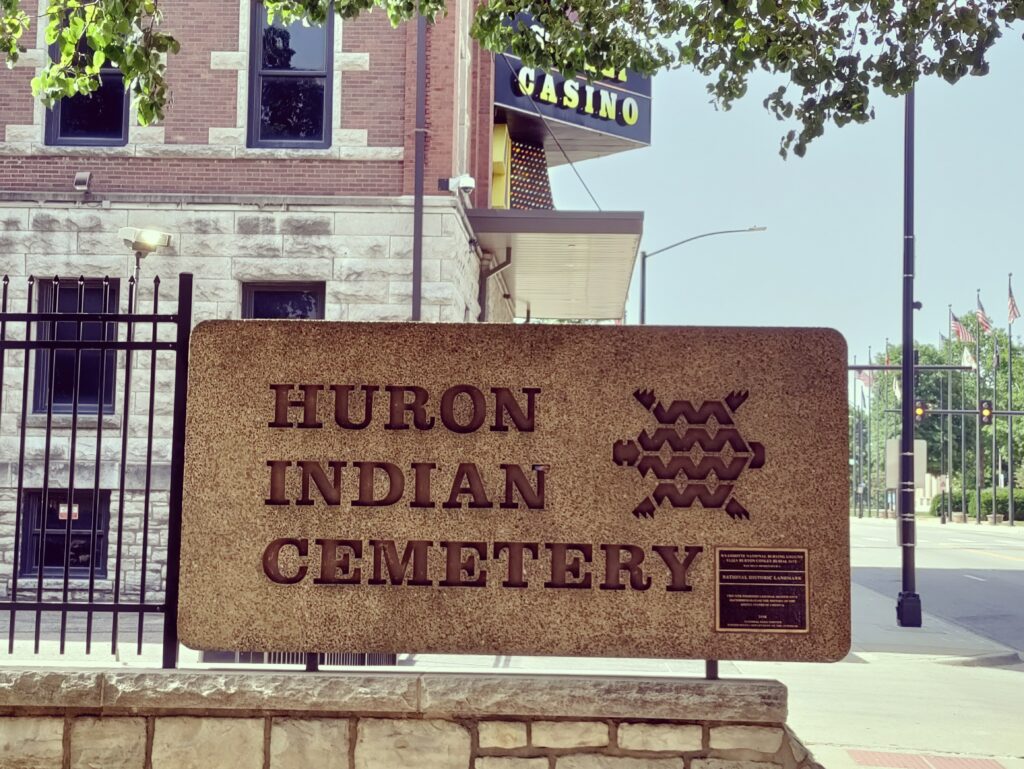 The Huron Indian Cemetery, also known as the Wyandot National Burying Ground, is located at 631 Minnesota Ave, Kansas City, Kansas.  Wyandot and Huron are simply different names for the same tribe.  The cemetery occupies a stretch of land between the 7th Street Casino to the south and the Kansas City Library to the east.  If you want to visit this National Historic Site, you can park directly in front of the library on Minnesota Avenue and then walk up the hill to the west and you will be in the cemetery.  There is a wooden walkway to help visitors up the hill, but it is closed and in severe disrepair.  You could also walk around the corner and enter the cemetery near the 7th Street Casino on 7th Street.  That entrance is a little easier as there is no major hill to climb, but there is less parking nearby.

If you enter the cemetery near the 7th street entrance, you will see a series of monuments and plaques that tell the story of the Wyandot Indians in the Kansas City area.  I’m not going to go into that history here but I hope you will read it when you visit.  For this post, I’m going to focus on the history of the cemetery itself as it has gone through a series of legal battles to remain in its current location.

The first interment in the cemetery was in 1843.  This coincided with the forced movement of the Wyandot tribe from Ohio to Kansas by the U.S. Government.  Upon their arrival in Kansas, over 100 tribe members fell victim to the new white diseases that were present in their new home, mostly typhoid and measles.  For the location of a new cemetery, the tribe chose a beautiful location on a ridge in what is now Kansas City, Kansas.  The site overlooked both the Kansas and the Missouri Rivers and was given to the tribe by the U.S. government.  The tribe owned the land until 1855 when the Wyandot nation lost its tribal status.  Even though the tribe didn’t own the land, it was left alone as a burial ground and sacred site.

In the 1890s, the Oklahoma version of the Wyandotte Nation agreed to sell the land to Kansas developers.  This transaction was agreed to, and the bodies were going to be moved to a cemetery in Quindaro until the three daughters of Andrew Conley stepped in and publicly fought to stop the sale.  The Conley sisters went as far as to deny entry to the cemetery via gunpoint.  One of the daughters, Eliza Conley, would become the first Native American woman to argue in front of the Supreme Court when she argued this case.  She lost, but the sale must have fallen through as the cemetery remained in place.  Eliza and her sisters Helena and Ida are all buried in the cemetery beside their parents.  Helena’s tombstone reads, “Cursed be the villain that molests their graves”.

There were other attempts to sell the land over the next 80 years but all of them fell through.  The status of the cemetery was solidified in 1971 when it was listed on the National Register of Historic Places.  In 1998 the Wyandotte Nations of Oklahoma and Kansas signed an agreement that the site would only be used for religious purposes.

There are estimated to be between 400 and 800 graves in the cemetery, most of them unmarked.  When you walk through the site, you will see many unknown graves as well as the graves of a large number of infants.  Pay attention to the dates on the markers.  I was surprised at the relatively young ages of the people who are buried here.  If you are up that way, stop off and take a look, it’s a peaceful place that makes you think a little about the life of these Native Americans when they came to Kansas.

Be on the lookout for my next book, “An American’s Guide to European Travel” which will be released in late July.  Get your copy at my website, www.jonathanjonesauthor.com.