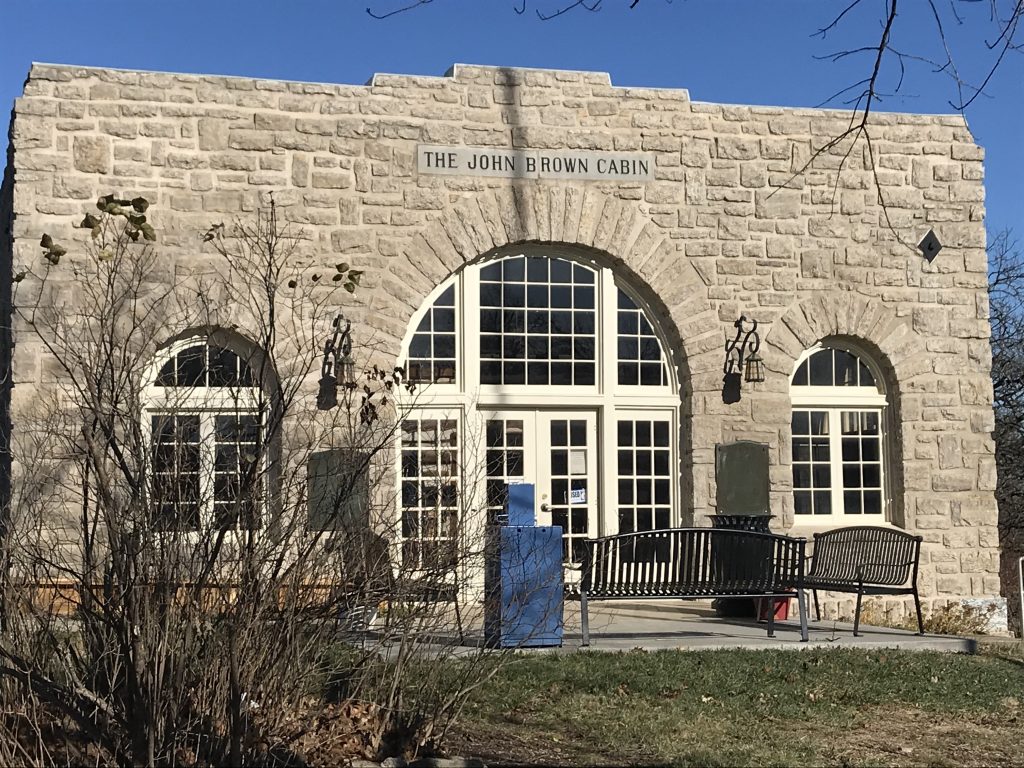 First of all, a shameless plug for my new book, Moonlit Mayhem: Quantrill’s Raid of Olathe Kansas. Get your signed copy for $5 off the purchase prices using the code “MOON521” at www.jonathanjonesauthor.com.
Now, on to today’s tour stop.
John Brown’s Cabin, a Kansas Historic Site in Osawatomie, Kansas, did not belong to John Brown. Instead, what is called John Brown’s cabin was the home of the Reverend Samuel Adair and his wife, Florella. Florella was John Brown’s half-sister. John Brown lived at the cabin with his sister’s family, during much of his brief time in Kansas during the Bleeding Kansas era. Brown is likely one of the most well-known Kansans even though he spent less than two years in the state.
Samuel and Florella had migrated to Osawatomie and bought the cabin in 1954 shortly after the Kansas-Nebraska Act opened the settlement of the Kansas Territory. The small cabin was purchased for $200 and was home to at least seven people. At least five of John Brown’s sons followed the Adair’s to Kansas. Brown himself joined his sons in Kansas to help his family but likely did not plan on staying long. In Kansas, Brown found many people who were interested in fighting against the Kansas Pro-Slavery Government which held power in the early days of the Territory.
The original cabin was located about a mile west of its present location. It was deconstructed and moved to John Brown Memorial Park in 1911. The cabin has been enclosed by a newer stone building to aid in the preservation of the building. Inside the building, there is a small, but interesting museum which is worth a visit. John Brown Memorial Park is also the Battle of Osawatomie’s location, the next stop on the Border War Tour.
On the topic of John Brown, I wanted to do a quick review of Showtime’s, “The Good Lord Bird”, which is a Showtime series starring Ethan Hawke as John Brown and follows the historic figure from the Pottawatomie Massacre until his execution at Harpers Ferry, Virginia, where he led a failed slave revolt.
I liked it. The story is good, not 100% historically accurate but close. I thought it did a good job of representing the views of the day and its depiction of John Brown is fair. John Brown is one of those historical figures where it really depends on which side you were on as to how you felt about him. Brown’s image is on full display in the Kansas State capital even though he was the leader of arguably the most heinous act committed during the Bleeding Kansas Era, the Pottawatomie Massacre. A good article about the series and separating fact from fiction can be found at this link:
https://www.historyassociates.com/the-good-lord-bird/ .
My one complaint about the show is that the main storyteller is a young, fictional, African American slave named, Henry “Onion” Shackleford. For some reason, the writers decided that Brown should think that Onion was a girl rather than a boy. This forced Onion to maintain the charade for the rest of the series. It was a bit unbelievable and made no sense to me as it added nothing to the show. The Good Lord Bird does not paint a very favorable picture of Frederick Douglass, read the link above to read more about Douglas.
Overall, I thought it was a good historical series and worth taking the time to watch.