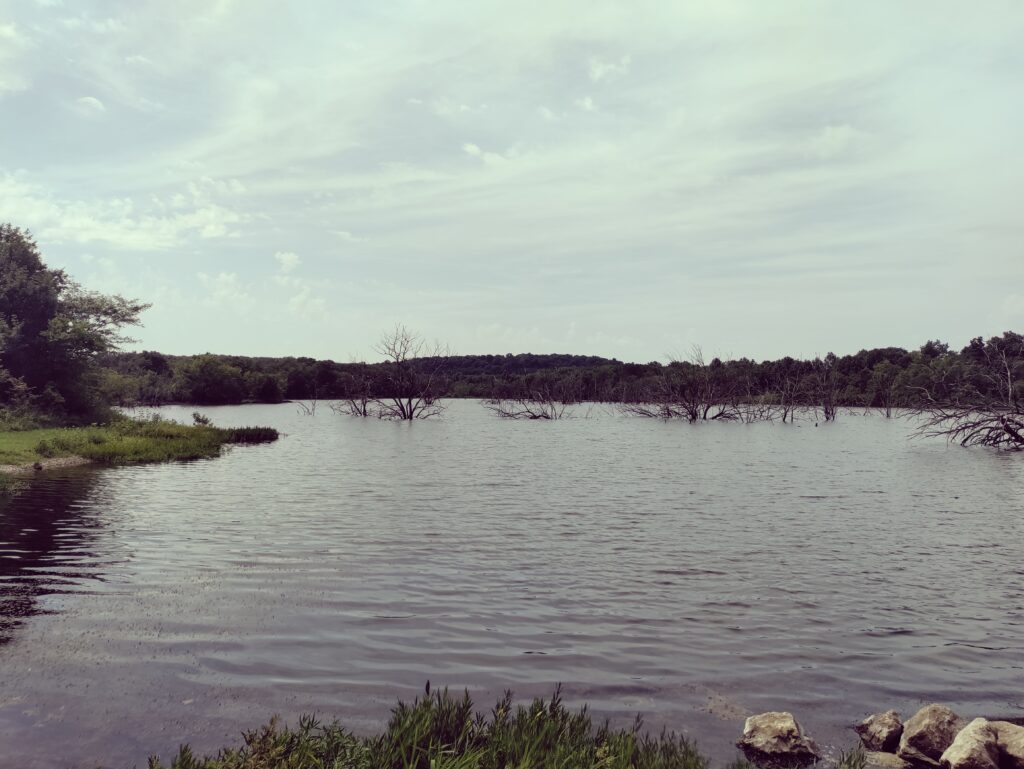 The Strange Tale of the Kingdom of Amarugia

The Kingdom of Amarugia was located in an area in Cass County between Freeman, Archie, and Drexel.  Much of the land is now a conservation area containing a 45-acre, man-made lake which was finished in 1987.

The strange part of the story is that this “Kingdom of Amarugia” created its own government in the early 1800s.  The government they created was a monarchy, ruled by a King.  Interestingly, while they had a King, it is not like they claimed independence from the United States.  After researching the Kingdom, it seems to me to be more like they just decided on their own form of local government, making the odd choice of having a king rather than a mayor, or County Commissioner.

Most of the information currently known about Amarugia is based on a small book written by Donald Lewis Osborn in 1972.  The book is out of print and the Osborne family only releases more copies sporadically.  Thanks to the Cass County Historical Society for allowing me to read their copy of the manuscript.

The geographic boundaries of the Kingdom of Amarugia are noted in the book as the South Fork of the Grand River to the north, the confluence of the South Fork, and the Middle Fork of the Grand River (now called the South Grand River) to the east.  The boundary to the south is listed as “the vast prairie lands of Everett” and to the west, the boundary is noted as the “plains of Brosley”.  Everett is a township (really just an intersection) that still exists today just south of the Amarugia Conservation Area.  The city of Everett seemed to act as the capital of the Kingdom as many of the kings lived there and official meetings were held there.  Brosley was a town that was roughly 11 miles from Everett, very near what is now the Kansas Border.  It seems a bit far to really be part of the Kingdom.  I believe that the “plains of Brosley” probably began just west of South Freedom St (Route O), even though the town itself was further west.

The Kingdom of Amarugia began around 1830 by fur trapper Basy Owens, who after building a trading post, decided that some form of government was needed for the local citizenry who had settled near the trading post.  He chose a monarchy and made himself the King.  Basy was later kidnapped by the tribes from the Indianans (the spelling here is correct, not sure if these were native Americans or some other “tribe” of people from “the plains of Indiana”) who hoped to ransom him.  The settlement decided that not to ransom him and simply crowned his son, King Owens III to replace him.

Just to give a bit of an idea of the power structure in the Kingdom, here are some of the titles, or committees that served in the Kingdom:  King, Duke, The Imperial Council, Count, Princess, Admiral, Commodore, Lord High Treasurer, Chief Almoner of our Largess (I think this is a religious leader), and High Muck-a-Mucks (the text makes me think this is similar to police).

Because King Owens III did not have an heir, a new king was elected after his death.  Sir Thomas Bundy became the new king, but his reign was cut short when his enemies gathered up enough strength to have King Bundy banished.  When King Bundy left, he appointed Jacob Weddington, aka, the Duke of Weddington, as the king.  Unfortunately, the Kingdom would not allow his ascension to the throne, because he was bald.  They insisted that he submit to having the crown glued to his head to hide his “condition”.  He refused, and Admiral David Wilson was named king.  Wilson ran into some lady trouble and soon vacated his crown under threat of beheading.  At this time, it was decided that the Duke of Weddington could be king even though he was still bald.  He ruled with his son and daughter-in-law, Count Samuel, and Princess Clara Garrett, over a peaceful kingdom until at least 1892.  It is at this point in 1892 that most of the history of Amarugia is lost.  The Kingdom continued, but no records have been maintained.  Most of the stories of Amarugia after this point are based on folk tales.  These folk tales talk of buried treasure, the KKK, mystical healings, and ghost stories.  Nobody really knows what is true and what is fiction.

I know that after reading this short post about Amarugia most readers are wondering, “Is that really true?”.  The best I can say is, “I think so”.  The details are fuzzy, dates are not available, and the exact facts have likely morphed as they were passed down through the years, but the basic story does seem to be true.  For more information, I recommend going to the Cass County Historical Society to view their copy of Osborn’s book.  Another article used for this post is by Lilly McClellan at https://theclio.com/entry/141792.