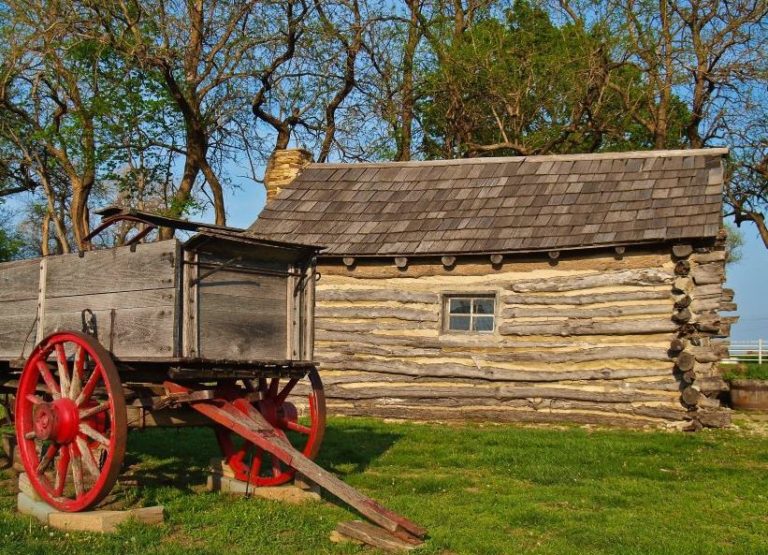 Little House on the Prairie

Border War Tour Stop: Drum Creek, Little House on the Prairie, Osage Indians vs Confederates, and the first serial killers.
There is a great deal to talk about at this tour stop. During the Civil War the Indian Territory, particularly the area in southeastern Kansas was full of activity with small skirmishes between the Union and Confederate troops. These troops would also help themselves to Native American property as they rode through this area. This southeastern portion of Kansas was primarily the home of the Osage Indians. Like most other Native American tribes at the time, the Osage had been pushed into Kansas and Oklahoma by white settlers and the US government.
Drum Creek was the area just east of what is today Independence, Kansas. At that time, it was called, Hay Town. In this area, Charles and Caroline Ingalls and their three girls would settle a few years later in 1869. This period of their life is chronicled in Little House on the Prairie, the third book in the Ingalls series. The Ingalls family were actually illegal squatters on the land as it belonged to the Osage Indians.
The Border War event of this tour stop occurred on May 15,1863 when a group of Confederate officers who had just been commissioned by Confederate Brass was on their way home to Colorado to raise troops for the Confederacy in that area. On their way through the Osage land, the rebels had no problem with using the resources that belonged to the Osage on their way through southwestern Kansas. At Drum Creek, an Osage called, “Hard Rope” and his 8 men happened upon the Confederates who had 22 men in their group. Hard Rope asked who they were, and the rebels lied and said that they were part of the Union detachment from Fort Humboldt. Hard Rope knew the men at Fort Humboldt and called them on their lie. Shots were exchanged and one Osage was killed.
Hard Rope then sent a message to a nearby village to request reinforcements. These reinforcements came and the rebels who had taken up a position on the Verdigris riverbank were wiped out. Only two of the rebels were said to have survived to tell the tale. The Osage scalped and maimed the victims. One account tells of one bald man, having his beard scalped from his face. There is also a story of the heads of these men being placed on wooden poles and posted in the area.
There is not much to see at this stop, just the marker, which is located just east of the Verdigris River on highway 160 east of Independence. The actual event happened a few miles to the northeast of this marker. The Little House on the Prairie Museum is 12 miles south of Independence.
Those who enjoy the macabre need to check out the marker at a rest stop 10 miles north on Highway 169 is a marker commemorating the location of the Bender Inn. This was the home of the infamous Bloody Benders, known as America’s first serial killer. See the images for more information on the Benders. Make sure and scroll through the images to this post, there is more interesting information in the captions.