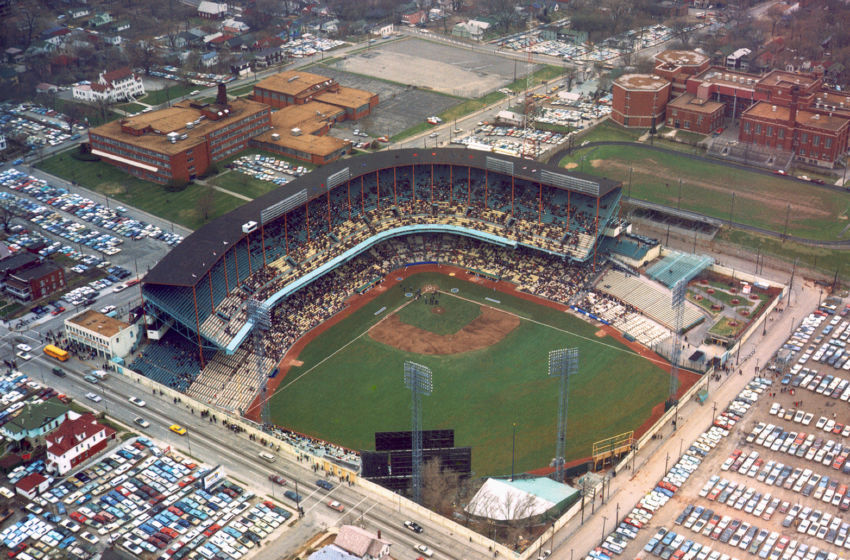 Kansas City Municipal Stadium was located at 2123 Brooklyn Avenue, Kansas City, Missouri.  If you are approaching from the north, you will drive past Arthur Bryant’s Barbeque before arriving at the intersection of Brooklyn and 22nd streets and the small park that memorializes the location of the old stadium.  To be honest; I was ready for the worst when I looked up the address and decided to visit the spot.  I was pleasantly surprised.  The site is in a nice neighborhood of middle-class homes with Lincoln Academy High School to the west and Lincoln Academy Middle School to the south.  A much nicer area than I anticipated.

Municipal Stadium was built in 1923 and initially called Muehlebach Field after Kansas City businessman George E. Muehlebach who owned the Kansas City Blues baseball team for whom the stadium was built.  The Blues were a minor league team who played in the American Association.  The Blues were affiliated with New York Yankees and the Pittsburg Pirates at different times during their existence.  Even though we hate the Yankees, you should know that several big names played for the Blues.  Famous Yankees: Phil Ruzzuto, Vince Dimaggio, Mickey Mantle, Whitey Ford, Ralph Houk, Billy Martin, Bill Verdon, Elston Howard and Johnny Mize all donned a Blues uniform during their professional career.  The city’s support of the Blues would eventually lead to a major league team in Kansas City.

Also using the field after it opened were the Kansas City Monarchs who would win two Negro League World Series in 1924 and 1942.  The Monarch also lost two Negro League World Series in 1924 and 1946.  The Monarchs were a model of success in the Negro Leagues boasting many players who would go on to be known as some of the greatest baseball players of all time.  Players such as Jackie Robinson, Satchel Paige, and Kansas City icon Buck O’Neill all played for the Kansas City Monarchs at one time.  If you have visited the Negro League Baseball Museum at 1616 E 18th St.  You need to go.  It is a great learning experience and a very nice museum.  www.nlbm.com

The stadium was briefly renamed Ruppert Stadium from 1937-1943 after Yankees owner Colonel Jacob Ruppert.  Ruppert died in 1839 and the stadium was renamed Blues Stadium in 1943.  In 1953, Arnold Johnson purchased both Blues Stadium and Yankee Stadium.  At the same time, he purchased the Philadelphia Athletics and announced that his plan to move the team to Kansas City.  He immediately sold Blues Stadium to the city who promised to make it major league worthy in the next year.  At this time the stadium was only one level, but the original builder Muehleback had correctly anticipated that the city would eventually have a major league team and had the footings built to be able to support a second level.

Unfortunately, the footings did not maintain their integrity over 30 years of Kansas City weather, and it was soon determined that the original footings would have to be removed and rebuilt entirely.  The new stadium was completed in just 90 days with three shifts of Kansas Citians working 24 hours a day to get the stadium ready for the Athletics opening day in 1955.  The stadium capacity when it opened was 30,000.

The Kansas City A’s played in the stadium from 1955 – 1967.  Through most of that period they were a perennial last place team.  The most notable things about this time period were when Charlie Finley bought the team and proceeded to try all kinds of crazy things to attract fans.  Finley moved the fences around several times, built a petting zoo just beyond the outfield wall and perhaps most famously, built a mechanical rabbit named Harvey, who would pop up from under home plate and deliver baseballs to the umpire.

The Kansas City Chiefs played in the stadium between 1963-1971.  The Chiefs generally played their first 2 – 4 games on the road because the stadium had to be retrofitted for football after the baseball season.  The field ran east-west along the first base line, with bleachers being added in left field to allow for larger capacity.  The AFL-NFL merger in 1966, which required all teams to have stadiums with a capacity of at least 50,000, meant the end for Municipal Stadium which at that time had a football capacity of 35,000.

The Kansas City Royals, a 1967 expansion team, played in Municipal Stadium from 1969-1972 before moving into Kaufman Stadium for the 1973 season.  The stadium also hosted an MLB All-Star game in 1960 and a Beatles concert in ’64.

The stadium was demolished in 1976 and was replaced at the time with a community garden.  Today it is a small park that is well worth a quick visit.