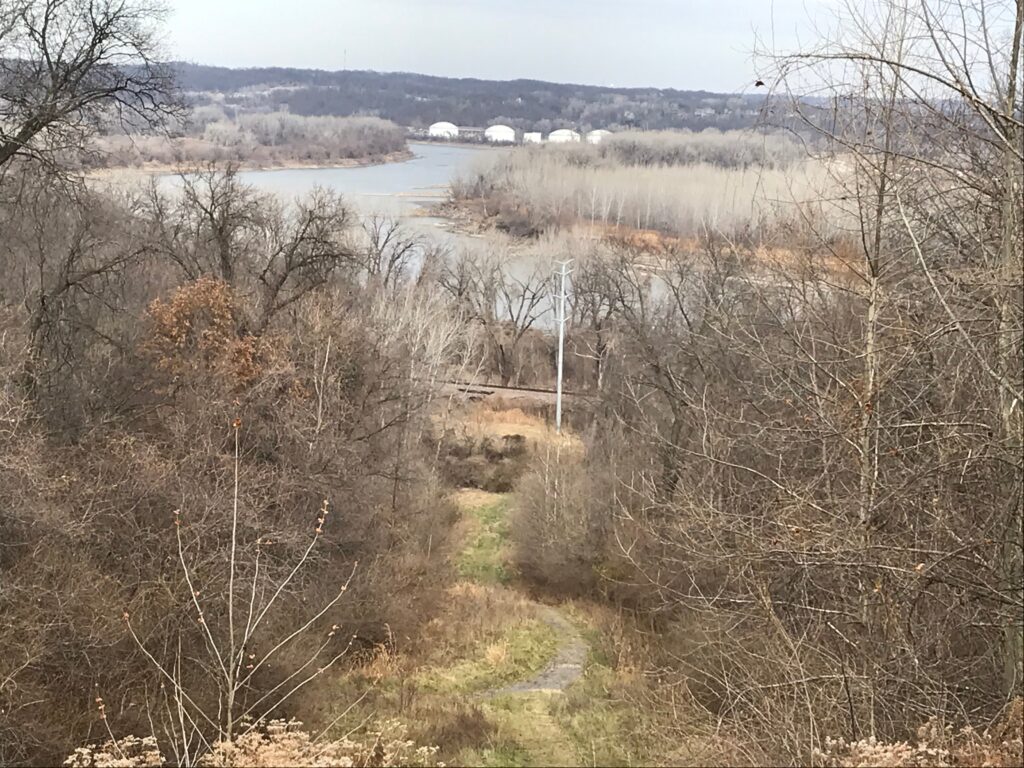 There is very little remaining of the town of Quindaro, Kansas today.  A modern park shelter now sits atop the bluff that overlooks the riverfront ground that bustled with activity beginning in the late 1850s and continuing to the end of the 1800s and into the early 1900s.  Unfortunately, the once-bustling area is no longer vibrant.  Instead, today, a visitor to the Quindaro neighborhood will see one of the poorest parts of Kansas City, Kansas.  As of 2021, the site is not open to visitors.  A shelter sits at the top of the bluff that looks down over the old townsite.  The current state of the area does not diminish the importance of the town as a hotbed for abolitionist and underground railroad activity before and during the Civil War.  After the war, the town would become one of the first predominantly African American towns in the United States.

The Quindaro Settlement, the land for which was purchased by Abelard Guthrie and his Wyandotte Indian wife, Nancy Quindaro Brown Guthrie, was founded in the mid to late 1850s by settlers sent west by the New England Emigrant Aid Society.  By 1857, the town claimed around 1200 settlers made up these Eastern migrants as well as a significant population of freedmen and Wyandotte Indians.

The city was one of many small ports on the Missouri River which hoped to become the main Free-State port on that side of the river.  The actual location was chosen due to the fact that on the riverfront, there was a large natural rock ledge in front of which the river ran 12 feet deep which made an ideal place for landing boats carrying passengers and cargo.

As one would expect, the town was very progressive in its thinking and treatment of African American’s.  By 1858, the town had established both a white school and a black school.  The establishment of the black school tells us that there were at least enough black residents to support a black school.  The white school was built for $2,000 and the teacher was paid $700.  The black school was built for $500 with the teacher earning $300.  The source from which this data comes makes a point to say that the difference in cost may be due to the number of students and not to purposeful lesser funding for the black school.  To further display the progressiveness of the town’s leaders and residents, on May 2, 1859, they approved Negro voting in municipal elections, a concept that was unheard of at the time.

In the early days and during the Civil War years, the town was a very active stop on the Underground Railroad.  Being located directly across the river from Parkville, Missouri allowed escaped slaves to be transported quickly across the river in boats or on foot in winter when the river was frozen.

By 1870, the black population of Quindaro had risen to 2,120, with most of the residents pursuing farming as a vocation.  One of the drivers for growth in the black community was the establishment of The Freeman’s School, later renamed to Western University, which began as a school for the children of former slaves after the end of the Civil War.  The University was taken over by the Methodist Church in 1896, and with the support of a 40-year government contract that guaranteed support, the school did well until 1939.  When the government contract expired, the school fell on hard times and closed in 1944.  The last Western University building was torn down in 1980 and the only remaining sign of the University is the 1911 statue of Abolitionist John Brown.

I encourage you to visit the Quindaro Facebook page for more information about Quindaro’s history and current efforts to preserve that history.