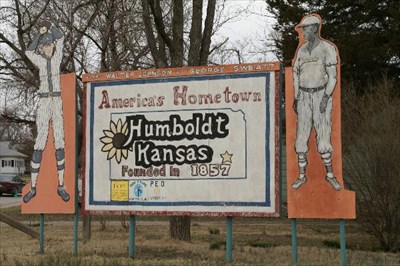 Border War Tour Stop: Rebel Raid on Humbold, Kansas
Humboldt, Kansas is a small town about 50 miles due east of Fort Scott, Kansas, and 10 miles north of Chanute, Kansas. The 2020 population of 1,769, is down from the 1,953 residents in 2010. Humboldt was founded in 1857 by German immigrants who identified as abolitionists during the Bleeding Kansas era. The German’s trip from the east was funded largely by the New England Emigrant Aid Society, that east-coast abolitionist organization who made it their mission to send as many abolitionist settlers to Kansas in their effort to ensure that Kansas entered the Union as a “free” state.
The Rebel Raid in the title of this stop was the second raid of the town since the beginning of the Civil War in April of 1861. When the war began, an infantry company had been organized in Humboldt and sent to Missouri. This meant that most of the able-bodied men were away when in September of 1861, the town was raided by a band of Cherokee, Osage, and rebel guerillas who were said to be searching for fugitive slaves. Humboldt’s location was very close to the Indian lands of southwest Kansas and further south into what is now Oklahoma. The Native Americans in these lands were no different from the rest of the county in that there were factions in their populations that supported both sides in the U.S. Civil War. The damage to Humboldt during this raid was largely limited to money and valuables being stolen.
Safety concerns after the Native American Raid led to the creation of the Humboldt Home Guard, which was comprised mostly of very old and very young men. This Home Guard did not put up much of a fight, when on October 14, 1861, a group of Bushwhackers and Confederate regulars attacked the city a second time. The rebel force immediately took the Home Guard members prisoner and then commenced robbing and burning most of the buildings in town. Fear of Union forces coming to town caused the rebel force to quickly leave town at which time they released all prisoners.
Why Humboldt? It seems like an odd choice for a raid when one looks at its location which is over 50 miles from the relative safety of the Missouri State line. Opinions vary, but the most common seem to point to the friendly relationship that many of the town leaders had with James Lane. Another possible explanation for the raid is that rebels wanted to exact revenge for Lane’s raid of Osceola, Missouri, just a month prior.
Humboldt has created a driving tour of some of the key sites in its Civil War history. I have visited twice, the first time I was able to get the driving map and followed it to the markers. The stone markers give a short description as to why that spot is important. On my second visit, the business to which I was directed to get the map had no idea what I was talking about when I asked for a map. To be fair, my last trip was during the Covid lockdown, so it’s possible that some things had changed or were not functioning as normal. I would recommend calling before traveling to Humboldt to make sure that you will be able to get a map. The markers are not easy to find without a map.
I love to eat at a local restaurant on my trips to Border War sites. While in Humboldt, I had the burnt ends at TJ’s BBQ, which were excellent. https://www.facebook.com/TJS-BBQ-340131512989936/