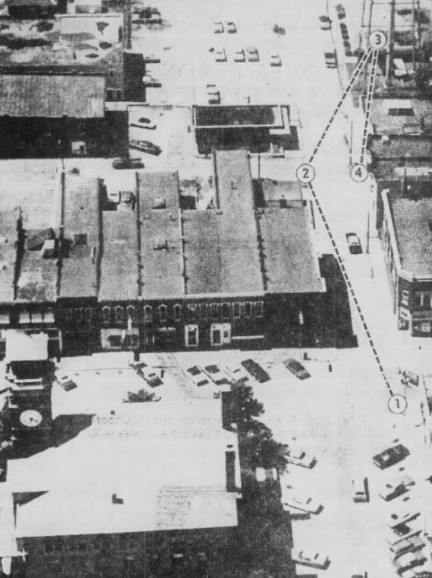 War on the Harrisonville Square 1972 Part 2

As mentioned at the end of part 1 of this series, the fuse that lit the fireworks occurred in front of the Sears store on the SW corner of the square on April 20th.  A crowd of approximately 25 hippies had gathered in front of the Sears store.  Don Foster, the manager of the Sears store, maintains that he asked the group to leave and they “started cussing me”.  Don’s father Lloyd Foster, who owned a pharmacy next door, heard the commotion and came out where he states that John also came and witnessed the events.  He testified that John Thompson took a swing at him which started the fight.

Harrisonville Police Sergeant Jim Harris, Officers Francis Wirt, and Donald Marler arrived and broke up the fight between Don Foster and Thompson during which Harris struck Thompson with his riot stick.  Lloyd Foster made it clear to Harris that he would file a complaint against Thompson at which point Harris decided to arrest 8 of the young people.  Thompson asked Harris to also arrest Don Foster also, but Harris did not.  Eight Hippies were arrested and taken to jail. John Thompson, 22, George Russell, 24, Gary Hale, 24, his brother, Steve Hale, 17, Edwin Allen, 24, Harry Miller, 21, Ronnie Thompson, 18, and Doug Sneed, 17.

I think it’s important to note that the story of the fight in front of the Sears store is much different from the hippie’s point of view.  The young people contend that Don Foster approached them with the full intent of starting a fight.  In their story, it was quite “convenient” that the local police were right across the street and would be there to arrest the long hairs as soon as it started.  I wasn’t there, but my guess is that the truth probably lies somewhere in the middle.  The reader should realize that the “two sides to every story” axiom applies to just about every incident that happened on the Harrisonville square before and after the shootings.

The young men arrested would remain in jail until the next morning, April 21st, when their leader, Charlie Simpson would show up and plunk down $1,550 in cash to bail them out.  It is said that this depleted Simpson’s savings which he had planned to use to buy a small piece of land where he and his friends could live free and get away from the hassles of authorities.  Walking into the jail to bail out his friends, Simpson told the deputy, “Simpson is my name and revolution is my game.  Free the people.”

We will likely never know exactly what pushed Simpson to do what he did.  Was he upset that he had to spend his savings or was the perceived harassment by authorities just gotten to be too much for him?  What we do know is that at exactly 5:50 pm that afternoon, Simpson, wearing a waist-length Army fatigue jacket, got out of a Volkswagen bug car driven by his friend John Risner in front of the Allen Bank and Trust Company on the Northwest corner of the square.  He entered the sidewalk behind Officers Wirt and Marler who had just walked past on a foot patrol of the square.  Simpson pulled an M-1 Carbine from under his coat and shot the two officers at point-blank range.  He then pumped multiple shots into each of n the wounded deputies as they begged for their lives.  Simpson fired an extra five or six shots into each body before turning and running into the Allen Bank.

Upon entering the bank, Simpson began spraying bullets into the rear of the bank.  It is doubtful that it is merely a coincidence that the bank was owned by G.M. Allen, the long-hairs number one enemy in town.  Two female bank workers, Miss Mary Ellen Stuart, 22, and Mrs. Deborah Roach, sustained minor injuries from the spray of bullets.  Both women would be treated and recovered from these injuries.

Leaving the bank, Simpson headed west down Pearl Street toward the First Baptist Church.  Twenty yards down Peal Street, Simpson encountered Orville Allen, 58, a delivery man for Capitol Laundry located on the south side of Pearl Street.  Simpson opened fire, hitting Allen twice, once in the leg and once in the chest.  Orville Allen would die from these injuries four days later.

After hitting Mr. Allen with his spray of bullets into Capitol Laundry, Simpson turned and ran across the street to the Sherriff’s office/jail where he sprayed bullets into the Sherriff’s living area where Sherriff Bill Gough had just stepped outside to see what was happening.  Gough was hit in the right leg and shoulder but would survive these injuries.

Simpson then headed back east up the hill toward the square.  About halfway there, he stopped in front of a retirement home, put the M-1 in his mouth, and pulled the trigger, ending the shooting spree.  There are some that think he took this final action because his getaway car never arrived.  Others believe this was the end game he had in mind all along.  We will never know for sure.

Surprisingly, the killings did not stop the hippie’s occupation of the square, but it did trigger other future events including Eszterhas’ article and later book, as well as the creation of the Harrisonville Vigilantes.  The Vigilantes were a group of residents and merchants that vowed to take the square back by whatever means necessary.  Tune in next time for that story.