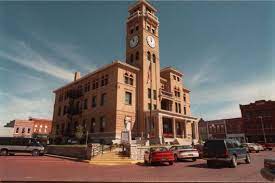 War on the Harrisonville Square 1972

This entry in my series of historic events on the border takes a bit of a different slant than my other entries which generally have focused on the “old west” time frame.  This three-part series will tell the story of Charlie Simpson and the shooting that he was responsible for on the afternoon of April 21, 1972, on Harrisonville Square.  I was a six-year-old kid living on Thunderbird Dr, a couple of miles from the square, at the time and was too young to know what was happening at the time.  I faintly remember the 6 pm -6 am curfew that was enacted but had no idea why the curfew was implemented.

In part 1 of this post, I’m going to take the reader through the events that led up to the shootings. Part 2 will cover the actual shootings and Part 3 will cover the fallout of what happened in Harrisonville after the shootings.  My main sources for these posts are newspaper articles of the time as well as Joe Eszterhas’ book, “Charlie Simpson’s Apocalypse”.  Eszterhas was a writer for Rolling Stone magazine at the time and published an article about the event in that magazine prior to publishing his book in 1974.  Eszterhas would gain more notoriety in the 90s as a Hollywood screenwriter where he penned famous movies such as Jagged Edge and Basic Instinct.  Part of the challenge with this post is to balance the accounts of the event.  Most of the newspaper coverage is pretty straightforward in terms of facts, but their sources and thus opinions are coming from the authorities.  On the other hand, Eszterhas’ account, as might be expected for someone writing for Rolling Stone, portrays the hippies in a more positive light as most of his source material is from their point of view.

Setting the Scene:  It’s mid-1972, the Vietnam War is not going well and is very unpopular.  Many of the young men who had served early in that war have now returned to a country that did not welcome them back with ticker-tape parades.  Many of these men were now, understandably, living with a dim view of America for which they had been fighting.  Young people all over the country were protesting the war, growing their hair, and generally rebelling against “the man” both locally and nationally.  Harrisonville, Missouri, was no different.  In the spring of 1972, a group of “hippies” (probably not the most PC word for this group, but it is what I’m going to use) some of which were Vietnam veterans had taken over the city square.  This group of hippies was led by two powerful personalities: Charlie Simpson and Edwin Allen.

Charlie Simpson was described by Eszterhas this way: “twenty-five years old, 6 foot 3, 180 pounds, flowing shoulder-length gunmetal-black hair, known to his friends as ‘Ootney’”.  He lived with his elderly father, Charles Simpson Sr., on a farm outside of Holden, MO.  He was regularly in trouble around the Holden area, but local officials claim that it was usually low-level traffic violations as well as a general lack of respect for authority.  He had cultivated a band of friends who shared his opinions about authority and his fascination with the words of famous anti-war activist Abbie Hoffman.  This group had adopted the Harrisonville Square as their home base.  Edwin (Win) Allen was a 24-years-old, track standout and 1966graduate of Harrisonville High School.  An African-American, Win also had little respect for anyone in authority and took every opportunity available to try and push the buttons of the town leaders and authorities.

To many Harrisonville teenagers, the hippies, who mostly ranged in age from 22-28, on the square were the “cool kids”. This status allowed them to attract a large following of high school kids who would join them on the square to the great displeasure of their parents.  Notably, a bevy of young girls, ages 14 – 18, were known to hang around Simpson’s crew, reportedly having sex with the hippies in their vans parked around the courthouse, or even in the bushes around the courthouse.  At the risk of again being non-PC, I think it would be wrong to ignore the racial climate in the 1970s and the fact that Win Allen was an African American.  Win’s race along with the fact that he was reportedly having sex with the young white girls would have further infuriated parents and town leaders.

In addition to their perceived “bad influence” on local kids, the hippies were also said to be regularly committing other acts on the square that would raise the ire of local merchants who contended that the mere presence of Simpson and his crew was hurting their business.  Many Harrisonville residents were hesitant to visit the square for fear of being the target of the hippies who would grab their crotches and make inappropriate comments to the town’s women, young and old.  The regular smoking of marijuana, drinking, and urinating on the courthouse grounds led residents to aggressively push their civic leaders and law enforcement officials to come up with a solution to the “hippie” problem.

The hippies would contend that local law enforcement was harassing them by charging them with minor crimes for which older, more “clean-cut” residents were not cited.  This perceived “double standard” led the hippies to label these law enforcement actions as “G.M. Allen’s War”.  Allen, who would eventually become a state senator, was a local bank owner, political leader and city councilman who made no secret of the fact that he wanted the hippies removed from the square.

An event would occur on Thursday evening of April 20th in front of the Sears Store which would light the fuse for Simpson’s actions which would occur the next day.  Check back in two weeks for part 2, where that event and the Simpson murders will be discussed.