This tour stop at Fort Hayes will wrap up our journey through the middle of Kansas. Hayes, Kansas is located on I-70 about 4 hours from Kansas City. For Hayes is located on the south side of the Hayes just off highway 183. The historic Site is surrounded on three sides by the Fort Hayes Municipal Golf Course.
Fort Fletcher was opened by the U.S. Army on October 11, 1865 with the purpose of protecting goods and persons traveling on the Butterfield Overland Dispatch stage and freight line from attacks from Cheyenne and Arapaho Indians. The initial location of the fort was about 15 miles south of the current fort beside the Smokey Hill Trail which is the road that the stage company used to go west. Despite the presence of the military, the attacks continued, and the Butterfield company soon went out of business. The fort closed on May 5, 1866, only 8 months after it opened.
The fort was reopened on October 11, 1866, about a quarter mile from the original location. This time, the purpose of the fort was to protect railroad workers who were building the Union Pacific Easter Division railroad to the west. The fort was renamed Fort Hayes, after Brigadier General Alexander Hayes, a civil war hero.
A flood and the fact that the railroad chose a path about 15 miles to the north forced the army to move the fort to be moved to its current location in mid-1867. The fort was meant to be a supply depot for other forts in the area, so it needed to be close to the railroad. The new site covered 7,500 acres and eventually contained over 45 buildings. Only a few of which remain today. The fort was so large because its purpose as supply depot required that there be warehouses to store goods as well as fields to keep horses and cattle to be provided to the other forts. Like all other forts in Kansas, the fort did not have walls around it.
The fort was a key installation for the army during the Indian Wars between 1867 and 1872. During this time the fort was used as a supply depot as well as a place to house soldiers fighting against the Indians. During these years, the fort hosted many famous military men including George Custer and his 7th Cavalry Regiment, Scouts Buffalo Bill Cody and Wild Bill Hickok and two regiments of Buffalo Soldiers.
The U.S Army closed the fort in 1889. In 1900 the U.S. Congress passed an act that donated the land comprising the fort to be used as an agricultural experiment station and the Kansas State Normal School. The Agricultural experiment station is still operated today by Kansas State University. The Normal school would become Fort Hayes State University. The few remaining fort buildings were saved when the site was named the Frontier Historic Park in 1929.
The current site contains four original buildings and a visitors’ center, which houses a small museum. Fort Hayes might be best known as a location in the movie Dances with Wolves starring Kevin Costner. The actual Fort Hayes site is not used in the movie. The site called Fort Hayes in the movie is actually located near Rapid City, South Dakota. 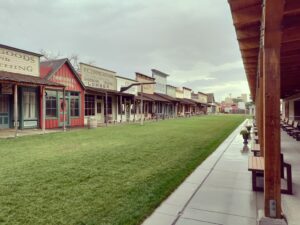